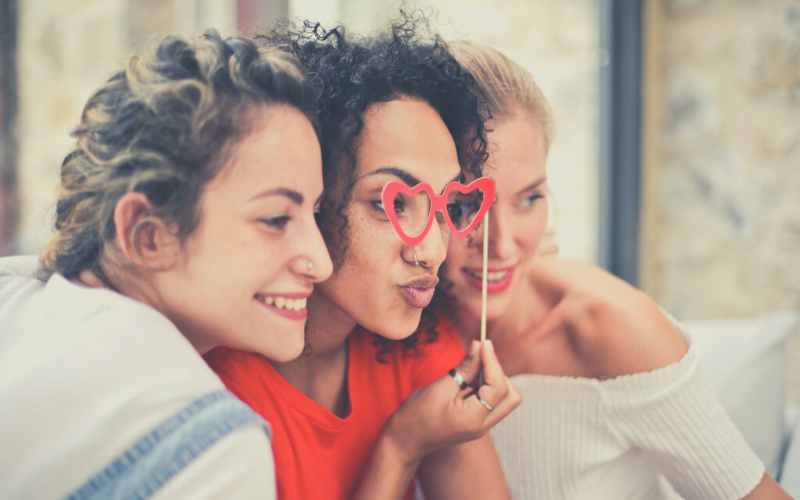 Gossip Girl became my second favourite TV show back when I was a 15-year-old starting high-school and buying Seventeen magazine to see all the awesome fashion that consisted of sparkly silver tops and plaid skirts.

Every day after school I would sit in front of the TV and watch Gossip Girl for hours at a time – I have like 30 DVDs with (absolutely legally) downloaded episodes.

Blair Waldorf is to this day, and I am 27 mind you, my biggest role model in life – I can quote my progressive yet Conservative elitist queen at 3 am if I have to.

Listen, I named our dog after Chuck Bass, if that’s not love then I don’t know what it is.

Since there is a remake coming out next year, which I will not watch or support, I figured we can have some fun and look at the original Gossip Girl characters as types of vegans.

GG is my second favourite TV show, right after Supernatural, and I have been rewatching it every year since I was 15 so I am very familiar with the characters and who they would be as vegans.

But… I would like to hear your thoughts and whether or not you agree with my picks. Leave me a comment below in the comment section because I would absolutely love to hear your opinion.

Here are Gossip Girl characters as types of vegans:

If there was a hierarchy of vegans she would be on top. She thinks of herself as the person who cares the most, knows the most and helps the most – there is no one who is as perfect at being vegan as she is.

If you attend a vigil she will organize the next one and if you buy one hummus she will buy every single product by the brand that made it.

It’s not that she actually is the perfect vegan but she is so sure of it that people can’t help but put her on a pedestal and think of her as their queen.

She is more vegan than anyone will ever be, and she will let you know.

Every month she either buys new leather shoes or goes to the zoo.

Although everyone keeps telling her that she is plant-based and not aware of the ethical side, she will brush your comments off and walk away.

It’s not that she doesn’t care about cows and chinchillas but life is too short for her to be limited to only buying faux fur and not wrap a fox around her neck.

She loves to drink kombucha and wear long dresses when attending festivals, but she can also get drunk on Friday and slip into her suede dress.

Offer her a joint and talk to her about the stars but don’t remind her that she is not vegan because at the end of the day, even though she says she doesn’t care about labels, vegan is who she wants to be and truth be damned.

That new veggie burger that just came on the market? Yeah, his company made it.

He also invested in a local veggie bakery, wrote a book about how to be an activist and helps brands sell #GoVegan shirts in his free time.

He sees the future and wants to be a part of it. There is nothing that scares him and sometimes you have to slow down his speeches to understand him because he struggles with explaining the vision he holds in his head to a basic person like you.

A white tee, black pants, a good pair of headphones and at 7 am he is already walking towards a cafe to have a meeting with an aspiring CEO.

When we get to Mars and they open the first vegan restaurant, guess who the owner will be?

You’ve seen him on social media.

Yes, yes, he’s the one holding a #peace sign at a protest smiling for the camera, sharing 20 different clips from the event on Instagram Stories.

Those shoes you just bought? He was the first one to collaborate with the brand and you’ve seen them on his profile.

He shares semi-nude photos for inspiration, writes captions that bring you to tears… from embarrassment, and his latest videos constantly capture your attention because the title makes sure you know that what he has to say is always Urgent! and Not Clickbait and You Won’t Believe What This Meat-Eater Said To Him.

He travels across South America, vacations in Greece and only eats in restaurants with 5 Michelin stars.

He is… the influencer.

(could not find one gif of Vanessa on Giphy, sorry)

She hates capitalism and deodorant. Private jets don’t impress her, neither do white people.

She loves Bernie Sanders and wishes she was born in Yugoslavia. Her friends send her photos of Venezuela, as it is her favorite holiday destination, and together they share a community garden where everyone gets an equal amount of tomatoes.

Her favorite social media platform is Twitter where she compassionately makes sure that people who disagree with her get fired from their jobs as she believes no one who doesn’t agree that men can menstruate deserves to be employed.

If you dare to question her beliefs she will make sure anti-fascists beat your grandmother, as she is elderly and all old people are racists.

Of course, killing other animals is totally wrong but what is worse is not following what is currently popular.

She was on Atkins, Keto and carnivore diets but for some reason, she didn’t poop for a week so thank goodness eating hummus and corn is popular now because she sure needs a detox.

No, she is not aware of what is happening in China, and why would she care? If it were really that important her favorite Instagram model would vaguely mention it during a bikini haul.

She is only vegan because a week ago someone sent her a DM with a photo of a dead piglet and now she is trying to learn how to care about those who are less fortunate.

It is really fucking hard but she thinks it is possible to grow her Instagram account without posing with her Gucci bag. And when a month from now she binges on Big Mac, she will just say her protein levels were so low that not even cocaine gave her energy.

He is best friends with the perfect vegan but because he knows he will never reach that level, he spends his time judging other people.

Is he a human being who can only do so much for animal rights? Absolutely, but that doesn’t mean he can’t expect others to do things he is unwilling to do.

He spends hours going from one vegan account to another leaving informative comments that include courageous words like stop pretending you care and you are a fake vegan.

He truly wants other activists to improve so he is willing to motivate them. You can thank him later by expressing how stupid you were before he started bullying you into quitting social media.

Now, thanks to the vegan police you finally know that no matter how much progress you do, you will never be enough.

No matter how many people you’ve inspired and mentored, how much money you donated or how many years you’ve been vegan for, you suck anyway and he will let you know.

The activist knows no fear and is willing to put herself in situations that we have nightmares about.

She could go Dexter on perpetrators at any time but she chooses compassion and perseverance. The best wars are won by people who know the best strategy, not those who are impulsive.

She has the balls to capture on camera blood and lives being taken away so that millions of people across the globe can open their eyes and start making positive changes.

She sometimes cries herself to sleep but every morning she gets up more passionate than ever to make the voices only a few hear played on a loudspeaker. She wants to wake everyone up and you can bet your ass she will.

If there was a photo of a person under the definition of the word brave, she would be on it with a smile on her lips and determination in her eyes.

This was so much fun! I watch a lot of shows so maybe I will do a similar post with La Casa De Papel or Psych next!

I am constantly trying to provide you with valuable tips about how to go vegan and create a sustainable lifestyle that I need to have fun every now and then.

I think that when we look at the types of vegans that exist in our community, we can learn two things: a) what we don’t want to do and b) who we are and whether or not that makes us happy.

I am a mix between Chuck, and Georgina (and maybe Nate), especially now that I am finishing my first online course that is about a topic we don’t talk about often. I am an activist blogger that aspires to become an entrepreneur in the future.

They are all connected and we can all switch positions at times but I find that we usually belong only in one to two categories long-term.

I am very happy with the decisions I’ve made as a vegan and wish to remain where I am, so this list really reminded me about what place in this community I occupy. It makes me want to become better and better at what I do. 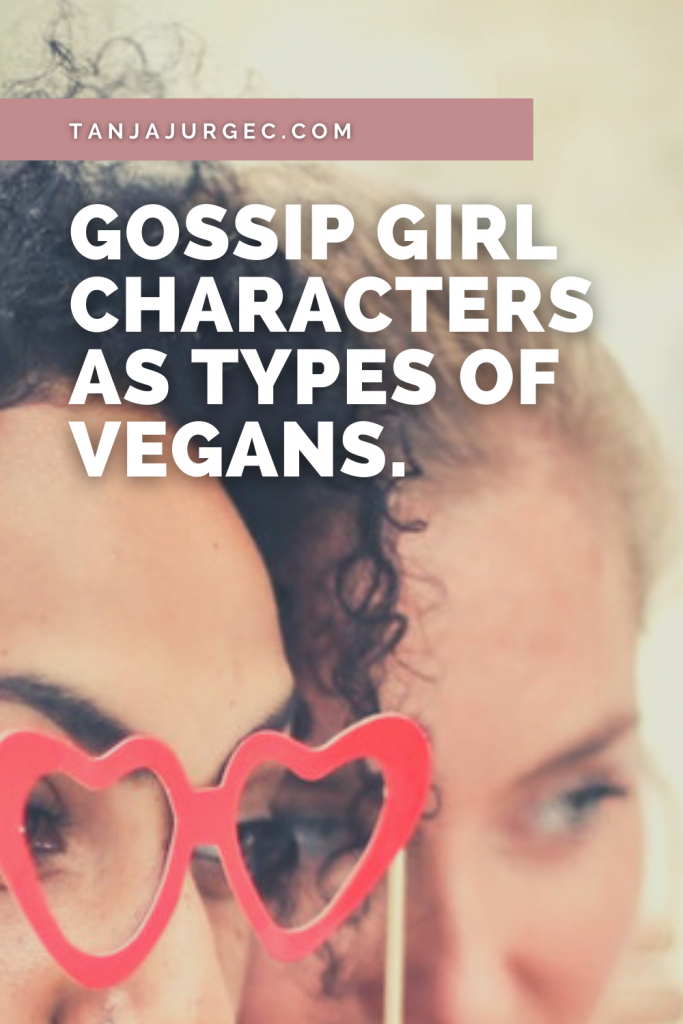